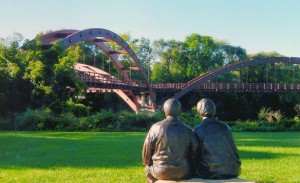 Carl and Esther Gerstacker enjoyed the Tittabawassee and Chippewa Rivers so much that Carl often trimmed trees to keep the path clear. But Carl and other community leaders believed Midland would benefit more if the rivers were connected with one bridge. This idea grew into a community wide project to build a three-legged walking bridge that Midland’s children later dubbed The Tridge.

The Gerstacker Foundation launched the project with a $366,000 matching grant challenge that
was met by the efforts of local citizens, foundations and school children who staged musical programs and other creative fundraisers. This effort raised an additional $368,000 and the Tridge was opened in 1981. 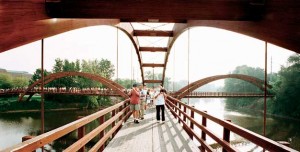 “The Tridge is a Midland centerpiece that ties the community together, serving as the focal point for festivals, family outings, concerts and other events,” said Cliff Miles, former city manager of Midland.  “It brings thousands of residents and visitors to the area every year, and has revitalized the downtown area.”

The Tridge has stimulated many riverfront projects, including the $177,000 Gerstacker Sprayground, wholly funded by the Gerstacker Foundation.  Built in 2001, it features a computerized fountain that squirts water, much to the delight of children looking for a fun way to cool off during the summer.

“Midland’s unique three-sided bridge is a wonderful example of our community’s ability to bring diverse groups together to make a dream a reality,” said City Manager Jon Lynch. “The Tridge has been an enjoyable focal point for citizens and visitors alike, and it is a great source of pride for our city.”